The solid Earth responds elastically to changes in mass surface load, which allows us to infer changes in total water at Earth's surface as a function of location and time. The spatial resolution is only limited by the spacing of the GNSS stations.  A spacing of 10 km would be sufficient to determine mass change in individual watersheds and ice basins. See project's Algorithm Theory Basis Document ATBD for more information. 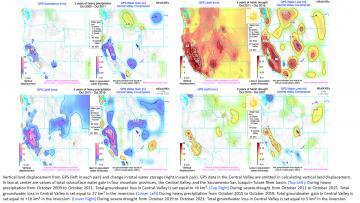 Changes in components of water storage are provided every two months in  text files representing the seen contributions to the water storage product. The first two columns in each file are latitude and longitude. ReadMe file.

Change in water in the ground not in hydrology models – “ground”

column 3- change in water in the ground not in hydrology models (mm); column 4 - uncertainty in equivalent water thickness (mm)