SOPAC has been active in crustal deformation monitoring (tectonic geodesy) with GPS for more than two decades. Recently, we have published a 3-D kinematic analysis of 20 years of cGPS daily displacement time series to create weekly displacement and strain rate fields to identify seismic and other transients and deviations from secular models. See a UNAVCO Science Snapshot on this work and a paper in Journal of Geophysical Research. In 2021, we created an integrated GNSS/InSAR displacement field with increased spatial resolution and a video to highlight areas of transient motions (Xu et al., 2021). We also developed a methodology to span the Jul7, 2019 Ridgecrest earthquake sequence with InSAR/GNSS integration (Guns et al., 2021).

Tectonic geodesy seeks to quantify and model crustal deformation at local to global scales to better understand the underlying physical processes of tectonic plate motion, plate boundary deformation, earthquakes and volcanoes (Bock and Melgar, 2016). Understanding these processes is critical to society’s efforts to mitigate the detrimental effects of natural hazards on civilian life and infrastructure. 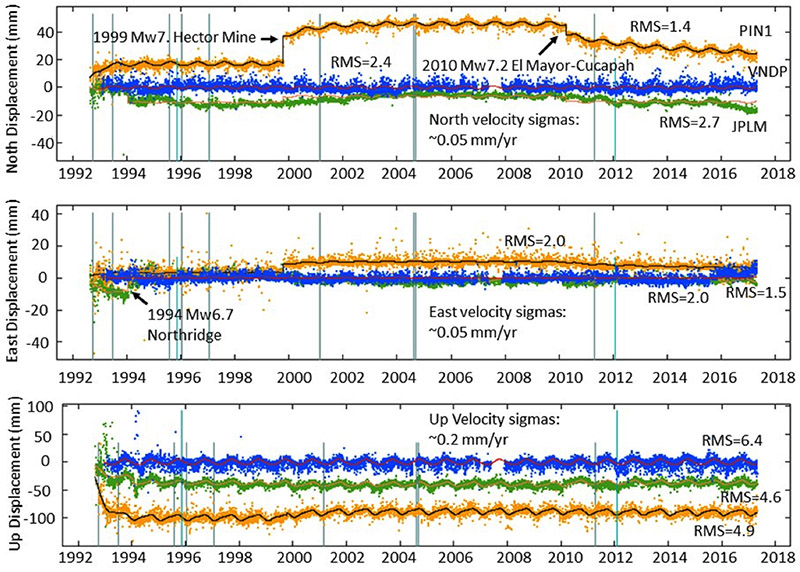 Crustal deformation of the Earth’s crust is driven by the motion of the tectonic plates. GPS along with other space geodetic methods provide direct measurements of surface displacements. A simplified description of plate boundary deformation is of a “crustal deformation cycle” or “earthquake cycle” composed of three primary phases. The interseismic phase is the period between earthquakes from 10’s to 1000’s of years, depending on the particular tectonic setting, during which the Earth’s crust deforms at a steady rate. An earthquake disrupts this secular motion during the coseismic phase (Bock et al., 1993; Blewitt et al., 1993; Hudnut et al., 1994), lasting from 10’s of seconds to no more than 10 minutes for great earthquakes such as the 2014 Mw9.3 Sumatra-Andaman event (Subarya et al., 2004). The coseismic phase transitions into the postseismic phase (Shen et al., 1994) as the Earth relaxes and returns to its steady state motion. The postseismic phase can extend to decades for great earthquakes. The period leading up to an earthquake is referred to as the preseismic phase, but there is scant observational data to support an unusual change in motion just prior to an event. However, the record of geodetic measurements to date is not long enough to measure a complete cycle or super-cycle in any one location. Thus, tectonic geodetic studies are comparative in nature, looking at plate boundaries at different stages of the cycle. These types of studies indicate changes in the interseismic rates of motion over the earthquake cycle (Wang, Hu, and He 2012; DeVries and Meade 2013). GPS measurements have also revealed previously unknown transients such as episodic tremor and slip (ETS) reflecting small motions on the fault interface with an apparent regularity, first discovered from cGPS observations at subduction zones in Japan (Hirose et al. 1999) and the U.S. Pacific Northwest (Rogers and Draggert, 2003). 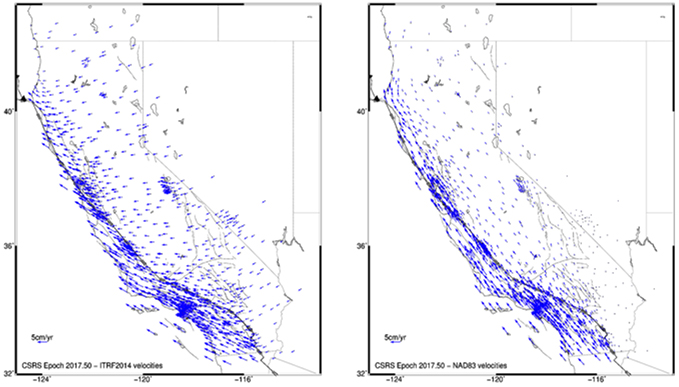 SOPAC is partnering with colleagues at the Jet Propulsion Laboratory to produce daily displacement time series, “Earth Science Data Records (ESDRs)”, as part of a NASA MEaSUREs project “Extended Solid Earth Science Data Records (ESESES)” (Bock et al., 2016). The daily time series now span twenty-five years for the earliest stations and today are available for thousands of global and regional stations, with a focus on western North America. Our approach is to maintain a consistent dynamic reference frame, loosely coupled to the International Terrestrial Reference Frame (the latest version is ITRF2014). Our reference frame is defined by the true-of-date coordinates of stations, where the effects of the significant non-linear motions are continuously monitored and taken into account. We use two independent GPS software packages (GIPSY at JPL and GAMIT at SOPAC) to estimate loosely-constrained station coordinates with their corresponding variance-covariance matrices. To reduce biases both use the same metadata from the SOPAC archive. This process results in two sets of independent time series. To maintain long-term consistency and robustness, each week the entire displacement time series from each center (now 25 years for the oldest stations) are optimally combined using JPL’s st_filter software package to produce a merged product, followed by parametric modeling of the resulting time series using JPL’s analyze_tseri software. An updated model for the combined time series is then used to generate new true-of-date coordinates for the next set of independent analyses by each center. This iterative process includes validation of relevant metadata, automatic and manual quality control for the individual timeseries, and identification of instrumental offsets and significant earthquakes, including coseismic and postseismic motions. The same frame is then used to generate the next set of satellite orbits and earth orientation parameters (EOPs) using the updated (modeled) true-of-date coordinates, and so on. This approach does not depend on a static list of stations, but can accommodate attrition of stations or addition of new ones. By obtaining an optimal combination of independent JPL and SIO daily solutions and fitting the resulting time series for typical earthquake cycle signatures, the residual time series then can be mined for transient deformation, including tectonic sources such as fault creep and episodic tremor and slip observed at subduction zones, and non-tectonic effects resulting, for example, from hydrologic and anthropogenic sources. 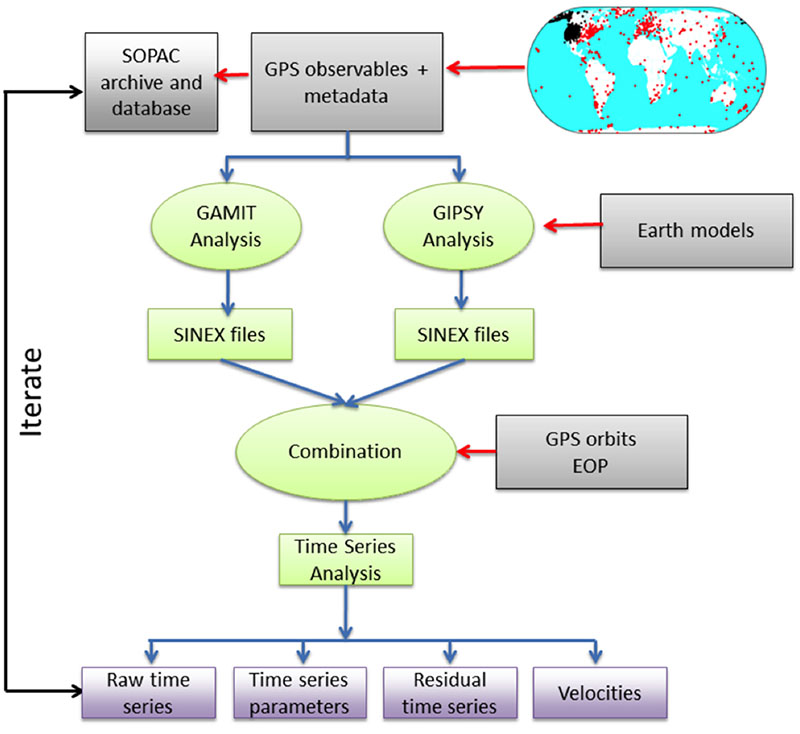 The GPS Explorer data portal developed as part of the NASA SESES project provides tools to access and explore weekly-updated GPS data, positions, displacement time series, and velocities from several thousand regional and global cGPS stations. Users (a user account is required) can select customized groups of stations that are stored for their further sessions.

The SESES products are available through GPS Explorer, from the SOPAC archive for Western North America and global stations, and NASA’s CDDIS archive of space geodetic data. For access to the SOPAC archive use the login “anonymous” and your e-mail address as the password.