The variability of lower troposphere water vapor is a major factor in short-term weather forecasting of extreme weather and its consequences, for example flash flooding. GNSS meteorology (Bevis et al., 1992) is a method to estimate tropospheric water vapor above a ground-based network of GNSS stations, equipped with meteorological sensors to measure surface pressure and temperature. The non-dispersive total troposphere delay in the travel time of radio waves can be estimated as part of geodetic-quality GNSS analysis of phase and pseudorange observations at a resolution of as short as 5 minutes. Specifically, the zenith troposphere delay (ZTD) is estimated and can be as large as 2.3 m. ZTD can be expressed as the sum of a hydrostatic component (zenith hydrostatic delay – ZHD) and a “wet” component (zenith wet delay – ZWD). The ZHD can be modeled very precisely by surface pressure measurements with a precision of ~0.3 millibars corresponding to a precision of about 1 mm in signal delay. The remaining ZWD is linearly related to precipitable water (PW), defined as the height of an equivalent column of liquid water if all the water vapor contained in a vertical column were completely condensed. The ZWD typically ranges from ~10-150 mm but can vary from a few millimeters in cold dry conditions to more than 450 mm in very humid conditions. The ZWD is difficult to model but can be estimated from surface temperature measurements (Bevis et al., 1994). To this end, SIO has designed and built a GNSS meteorology system to upgrade existing GNSS stations or establish new stations. The system consists of an SIO Geodetic Module and an inexpensive MEMS MetSensor that measures surface pressure, temperature and relative humidity. The Geodetic Module is also able to support seismogeodesy with the addition of the SIO MEMS Accelerometer.

As an example of GNSS meteorology, we collaborated with the Jet Propulsion Laboratory (JPL) in Pasadena and NOAA’s Weather Forecasting Offices (WFOs) in San Diego and Oxnard to demonstrate this capability. We made use of the GNSS network in southern California with a network spacing of ~30 km. NOAA was able to operationally issue an accurate flash flood warning during the North American Monsoon in the summer of 2013 by tracking the increase in precipitable water (Moore et al., 2015). The summer monsoon season in southern California and the southwestern U.S. is due to the rapid evolution of surges of low-to-mid level moisture from the Gulf of California and Gulf of Mexico. Increasing levels of PW interact with the mountainous terrain and can cause severe thunderstorms followed by dangerous flash floods.

The SIO MetSensor is a low power, low cost, MEMS-technology-based meteorological sensor that collects barometric pressure, temperature and relative humidity measurements for GNSS meteorology. We offer two versions of the MetSensor; the "RS-422 version” which is directly compatible with (and powered by) our SIO Geodetic Module (GM) as well as the "RS-232 version” which can operate without the GM and directly connect to a GNSS receiver.

The device operates in the “polled mode”.  In polled mode, the client computer (or GNSS receiver) issues the “0R0” (zero R zero) command and the MetSensor replies with a data sample similar to:

As the instrument produces three measurements; temperature (°C), humidity (%) and pressure (bar), only the “Ta”, “Ua” and “Pa” in the response string above are valid.  The last two bytes are the checksum value.

Both the RS-422 and the RS-232 versions use a single, outdoor rated CAT5 (4 pair, 24 AWG) cable for power and data.  The cable attaches to the sensor housing via a single waterproof 8-contact circular locking connector.

When the RS-422 MetSensor is connected to the GM, the data samples are
time stamped by the GM then served via TCP/IP stream to the recording client.  Only the RS-422 version can be enabled for operation over extremely long cable distances (~500 feet).  The cable connection to the GM is completed by a single RJ-45 plug that mates to any of the GM’s three sensor input ports as shown below. 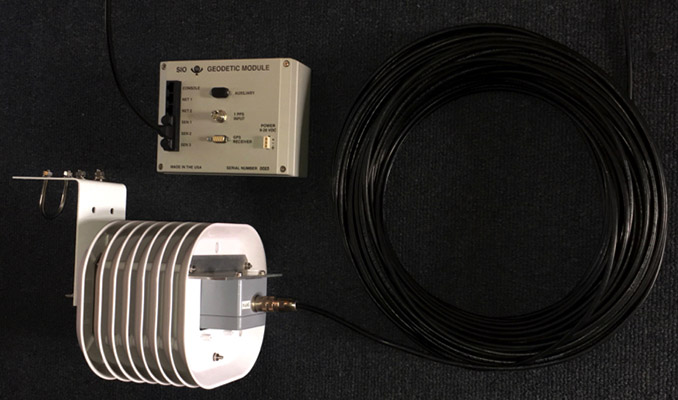 The RS-232 version is a standalone unit that can be connected directly to a GNSS receiver’s RS-232 serial port as shown below. Our custom splitter/adapter at the receiver end is required to inject power for the MetSensor as well as provide the DE9F (D-sub, 9 socket female) data connector to mate with the GNSS receiver’s serial connector. 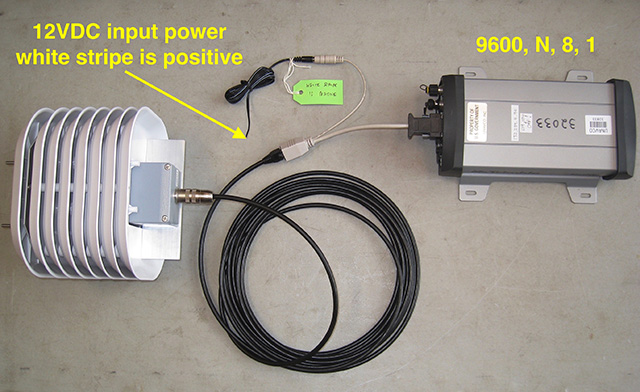 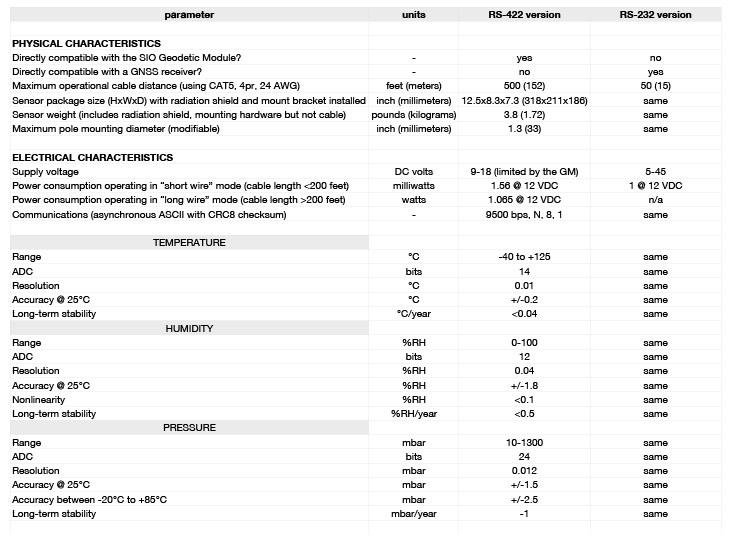 The formats of two types of real-time streams that are output from the SIO Geodetic Module: Meteorological (MT) and Accelerometer (AC) are described here. The initial section of the header is the same for each type followed by type-specific terms.

We will only be reporting Ta, Ua and Pa in the data block (at least for now)